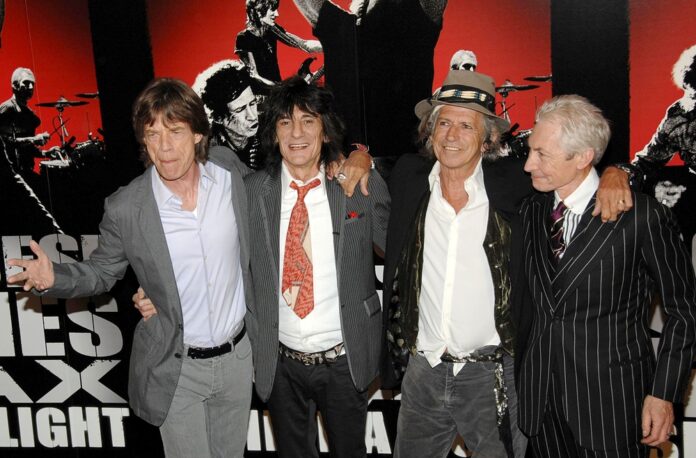 Depending on who you ask, the list of the most successful bands ever will vary significantly
depending on a variety of factors such as age, music taste and culture. However, as with any business, you can bring it back to numbers. The below list of the Top 10 Best-Selling Bands of All Time, is based on the certified number of records (including digital downloads) each band managed to sell all around the world (to date).

Although coming in in tenth position, The Rolling Stones have still sold over 100 million records worldwide.

Founded in London in 1962, The Rolling Stones was originally made up of Mick Jagger, Keith Richards, Brian Jones, Bill Wyman and Ian Stewart. Ian left the band in 1963 followed by Brian in 1969 and Bill in 1993. Charlie Watts and Ronnie Wood joined in 1963 and 1975 respectively and have remained with the band since. Whilst Mick Taylor joined in 1969 and left in 2014. However, thel band is now officially made up of Mick Jagger, Keith Richards, Charlie Watts and Ron Wood.

The rock bands best selling album is Sticky Fingers which was released in 1971, whilst their best-selling single is (I Can’t Get No) Satisfaction, released in 1965.

In ninth place, Metallica have sold over 105 million records worldwide.

Founded in Los Angeles in 1981, Metallica was originally made up of James Hetfield and Lars Ulrich. Kirk Hammett and Robert Trujillp joined in 1983 and 2003 respectively and have remained with the band since. Cliff Burton, David Mustaine and Ron McGovney joined in 1982, whilst Jason Newsted joined in 1986. Ron McGovney was only a member of the band for 1982, whilst David Mustaine left in 1983 followed by Cliff Burton in 1986 and Jason Newsted in 2001. The band today is still made up of James, Lars, Kirk and Robert.

The heavy metal band’s best-selling album was the self titled 1991 album Metallica, whilst
their best-selling single was Enter Sandman also released in 1991.

U2 take eighth place with over 115 million record sales worldwide.

Taking 7th place is the pop rock band, Maroon 5 who have sold over 120 million records worldwide.

Formed in 1994 in Los Angeles, the band was formed by Adam Levine, Jesse Carmichael, Michael Madden and Ryan Dusick. They have since been joined by James Valentine in
2001, Matthew Flynn in 2006, Paul Morton in 2012 and Samuel Farrar in 2016. Whilst Ryan Dusick left the band in 2006.

In 6th place is AC/DC who have amassed over 125 million worldwide record sales to date.

The hard rock band’s best-selling album was the 1980 album Back In Black, whilst their best-selling single was Highway To Hell released in 1979.

In fifth position is Pink Floyd, with over 130 million worldwide record sales.

The rock band’s best-selling album was their 1973 release titled The Dark Side of the Moon, whilst their best-selling single was Another Brick in the Wall which was released in 1979.

No longer active, the band was formed in 1968 and separated in 1980. Founded in London, by John Baldwin, John Bonham, Jimmy Page and Robert Plant the group maintained the
same members throughout its existence.

The hard rock band’s best-selling album was Led Zeppelin IV released in 1971,whilst their 1969 single Whole Lotta Love was their best-selling single.

With an amazing 150 million worldwide record sales, Queen take third place in the most successful bands ever.

Formed in 1970’s London by Brian May, Roger Taylor, Farrokh Bulsara (a.k.a. ‘Freddie Mercury’) and John Deacon, the band is still represented today by Brian and Roger. Freddie sadly passed away in 1991, whilst John left the group in 1997.

The rock band’s best-selling album was their 1981 Greatest Hits, whilst their best-selling single was Bohemian Rhapsody released in 1975.

The Eagles take 2nd place in the most successful bands of all time with an incredible 160 million worldwide record sales.

The number 1 most successful band ever is the Beatles with an unbelievable 290 million worldwide record sales.

Founded in Liverpool, by George Harrison, John Lennon, Paul McCartney and Ringo Starr, the band was only together from 1960 to 1970.