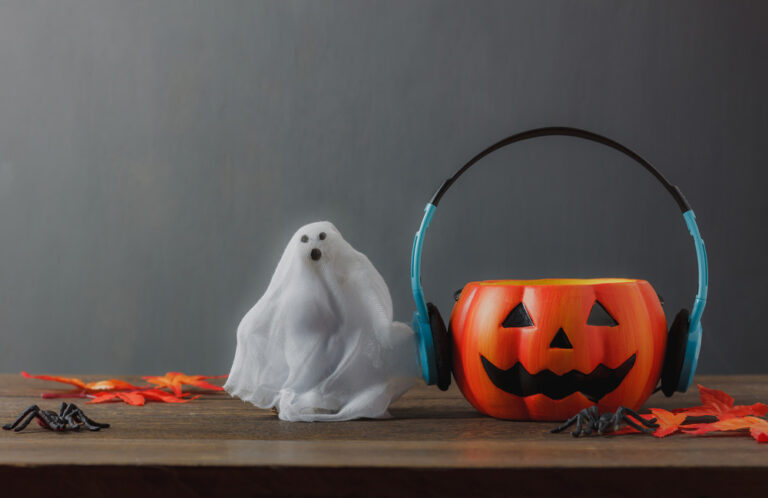 Throwing a Halloween party? Alongside a good horror film, a playlist of spooky tunes is the perfect accompaniment to a Halloween celebration.

Thriller by Michael Jackson was released in the UK in November 1983 and released in the US in January 1984. Produced by Quincy Jones and written by Rod Temperton, ‘Thriller’ peaked at the number 4 spot on the Billboard Hot 100 charts. Since its release, the song has entered the Billboard Hot 100 several times due to its popularity around Halloween time.

2.This Is Halloween – Danny Elfman

Released in October 1993, ‘This is Halloween’ is a song from the Halloween film The Nightmare Before Christmas. The music and lyrics were written by Danny Elfman who is an American film composer, singer and songwriter.

3.’I Put a Spell On You’ (Remix) by Screamin’ Jay Hawkins

Although failing to make the Billboard pop or R&B charts, the 1956 song ‘I Put a Spell On You’ written and composed by Screamin’ Jay Hawkins was selected as one of the
Rock and Roll Hall of Fame’s 500 Songs that Shaped Rock and Roll. The song has been covered several times including by Annie Lennox in 2014. Although Lennox’s version failed to chart until it was included in the 2015 film ’50 Shades of Grey’.

‘Ghost Town’ by The Specials, a British two-tone band was released in 1981, went on to spend three weeks at the number 1 spot in the UK Singles Chart and 10 weeks in the Top 40. It was also the 12th-best-selling single of 1981 in the UK. The Specials re-released ‘Ghost Town’ in 1991.

Reaching the number 2 spot on the Billboard Hot 100 following its release in 1984, ‘Somebody’s Watching Me’ was recorded by American singer Rockwell. The song also features vocals from Rockwell’s brothers, Michael Jackson and Jermaine Jackson.

Originally written for the Stephen King film of the same name, the song ‘Pet Sematary’ was released in 1989 by The Ramones. The song went on to become one of The Ramones’ biggest hits and was their highest charting song, peaking at number 4 on the Billboard Modern Rock Tracks chart.

7.Welcome To My Nightmare – Alice Cooper

Peaking at number 18 on the Billboard Hot 100 charts, ‘Monster’ by Kanye West was released in August 2010. The single also features versus from Jay-z, Nicki Minaj, Rick Ross and Bon Ivor.

Released in October 1980, ‘Hell’s Bells” was the first track of the hard rock band AC/DC’s album ‘Back In Black’. Although ‘Back In Black’ was the groups seventh studio album, it was the first album released after the death of lead singer Bon Scott. The single ‘Hell’s Bells” is widely considered to be one of the best songs from the band, with over 1,000,000 copies sold.